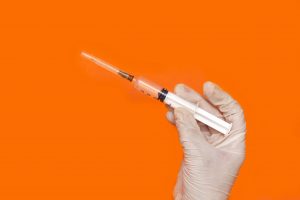 Putting Xiaflex enzymes into the body is a big deal.  After all, Xiaflex dissolves collagen in any nerve, muscle, tendon, ligament etc. it touches, as well as the DC finger cord.  Talk about needing surgical precision!  It is difficult to do well, and risky if things go wrong – just like all surgeries.

Obviously, a Xiaflex injection is not major hand surgery.  On day one, a surgeon guides a hypodermic needle under the skin to put enzymes in three parts of the finger cord.  Remember, the goal is to make a precise injection – without being able to see the needle tip or cord.  Xiaflex enzymes then attack the cord to dissolve it.  On day two, the doctor forces the finger straight until the cord breaks.  These two acts are surgery, as described below. The Xiaflex procedure requires no cutting, results in little blood loss, although pain can be intense.  Even so, side effects can arise as in any surgery.  Still, no scalpel cuts the skin.  This makes it easier to say Xiaflex is a non-surgical treatment for Dupuytren’s contracture.

In fact, scalpels and blood loss are a part of  surgery, but not all.  As noted below, the Xiaflex procedure is minimally invasive surgery for the treatment of a disorder through any size opening made with a sharp tool.  Because it is surgery, it has side effects and complications.  Like any surgery.

Only trying to avoid hand surgery

Naturally, most people want to avoid surgery.  By calling Xiaflex a non-surgical treatment for Dupuytren’s contracture, it is easier for patients to agree to it.  Patients have the Xiaflex procedure to avoid surgery.  Soon, they discover it is minimally invasive closed hand surgery.

Xiaflex injections are clearly a surgical treatment for Dupuytren’s contracture, not a simple thing like “getting a shot.”  Proof:

With no large incision on the palm, the real work takes place under the skin by the action of Xiaflex enzymes.  It is like putting acid down a clogged drain. Like all surgeries, this creates the potential for positive and negative consequences.

Dictionaries do not agree that the Xiaflex injection is a non-surgical treatment for Dupuytren’s contracture.

During Xiaflex closed surgery, destruction of cord tissue occurs after a needle delivers the therapeutic substance Xiaflex into the DC cord.  Later, manipulation of the weakened cord breaks it.  This is the dictionary definition of surgery.

Comparison of “getting a shot” to Xiaflex

A trained layperson can give a flu shot.  It is easy to learn and simple to do.

A surgeon must do the Xiaflex procedure.  Since the skin is not open, the doctor cannot see the cord or tip of the needle. For this reason, it is complex and difficult to do.  The surgeon must rely on keen skill and long experience to put the Xiaflex only into the cord.  The goal is to not allow even the smallest amount of Xiaflex in or on muscles, tendons, ligaments and nerves near or next to the DC cord.  Xiaflex surgery can be difficult to do well.  This is why some Xiaflex procedures go badly wrong.

Comparison of Xiaflex procedure to a common injection

Further discussion of results and costs of Xiaflex procedure

No data is available telling how many patients never have the cord snapped.

** Average cost of $7657.00 based on DC cord breaking at the end of the first Xiaflex injection series.  If it takes one or two more Xiaflex series to  to break the DC cord, the total cost increases with each one.

The Xiaflex procedure is demanding and can be difficult.  It requires high surgical skill and effort. Remember, the surgeon cannot actually see the cord or needle tip while making Xiaflex injections. Therefore, great risk is involved – much more than getting a shot.   Many doctors do not get it right the first time.  For this reason, many patients need two or three Xiaflex procedures to break the cord.  For some people it is never broken.  If this is not surgery, what is?

The Xiaflex procedure helps many Dupuytren’s contracture patients.  However, saying it is non-surgery downplays the difficulty and surgical risk involved.

It is not correct to say the Xiaflex procedure is a non-surgical treatment for Dupuytren’s contracture.