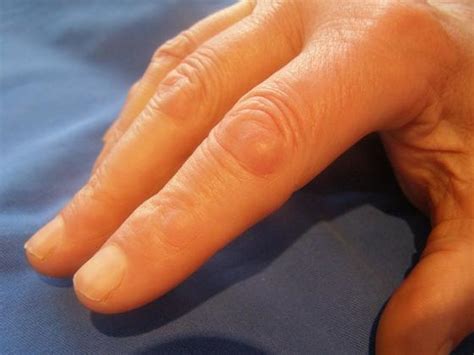 Garrod’s pads and Dupuytren’s contracture occur together in 20-30% of people we work with.  In addition, we also help people who only have bad knuckle pads. Both groups come to DCI looking for a simple natural treatment.  They want to avoid hand surgery, get rid of their Garrod’s knuckle pads, or eliminate the knuckle pain.

The Dupuytren’s Contracture Institute receives 8-10 reports of moderate to marked improvement of DC palm lumps and cords for every failure reported, when using the DCI large treatment plan. Improvement of dense and painful knuckle pads is even better. In fact, we usually tell people that their Garrod’s pads will likely respond and improve before they notice a change in their DC.

Usually, all it takes is a few weeks of using a DCI Dupuytren’s treatment plan for the knuckles to look and feel better. The larger the plan, the faster the improvement occurs.  This is true because Garrod’s knuckle pads are s a fibromatosis condition, just like Dupuytren’s contracture!  Rarely do we work with someone without some degree or type of improvement happening.  This includes complete reversal and elimination of the Garrod’s pads. Complete instructions come with each order.

Garrod’s knuckle pads are well-defined and smooth lumps or thickening on the dorsal (back) surface of the finger joints. They are a form of fibromatosis, just like Dupuytren’s contracture (palmar fibromatosis), Ledderhose syndrome (plantar fibromatosis) and Peyronie’s disease (penile fibromatosis).

Over the years DCI has worked with and helped over 600 cases of Garrod’s pads.  These people totally eliminated or significantly reduced their knuckle deformity, or at least eliminated all pain and limitation it causes.  While a few got a small amount of improvement, most benefitted to a moderate to great degree. Of course, all treatment was safe and natural. Without drugs or surgery, and no side effects.

Clinical features of a knuckle pad

Knuckle pads can look like calluses on the skin, where the skin thickens and loses its elasticity. They are caused by fibrous tissue in or under the skin. Because this problem is a fibromatosis of the fingers, it usually runs in families, but can also appear as a sporadic occurrence.

Garrod’s pads can appear in one or both hands, at any or all fingers, one joint or many.

They appear mainly at the PIP finger joint (joint closest to the hand).  Less often at the MCP (metacarpophalangeal/first joint) or DIP (distal interphalangeal/third) joint.

Some clinicians even apply the name to other parts of the body.  Although the hands are by far most commonly affected, other areas and joints, such as the feet and knees, may be involved.

When appearing along with Dupuytren’s contracture, Garrod pads usually suggest a more aggressive form of DC.

Pain associated with these fibrous pads is greatly variable. For some people there is no pain; for others the pain is intense and constant.  Further, for some the knuckle pain is constant, while for others pain occurs only when touched or when the finger moves.