Dupuytren contracture (also called Dupuytren’s disease, Viking disease, Palmar Fasciitis) is a common disease of the hand, usually not painful, in which one or more contractures of fingers cause those fingers to bend toward the palm and cannot be straightened to a flat position. Dupuytrens contracture is named after can Guillaume Dupuytren, a French surgeon, who was the first to provide a detailed description of the disease in 1831. Although the problem had been discussed as early as 1614 by Plater, Dupuytren’s was the first and most thorough serious study by modern standards, with classic dissections and detailed description so that his name will forever be associated with the condition.

Technically, Dupuytrens contracture is a fibroproliferative disease of the palmar fascia. This means that the cells that are responsible for making the tissue tough and strong (fibroblasts, myofibroblasts, and the collagen that both of these cells manufacture) are created to great excess in and around the thin but tough layer of tissue in the palm just above the fingers tendons. This is the basic pathology of Dupuytren’s contracture.

Dupuytrens contracture is often first noticed as a small painless depression, dimple or lump on the palm of the hand. The skin and fascia (thin but tough layer of fibrous tissue between the skin of the palm and the underlying flexor tendons of the fingers) of the palm begin to feel dense and hard. At about this time the patient will notice the palm cannot be placed flat on an even surface, such as a table top. This is a progressive disease, but it is not possible to predict how quickly it may develop, or the eventual severity of the hand deformity or incapacity that results. 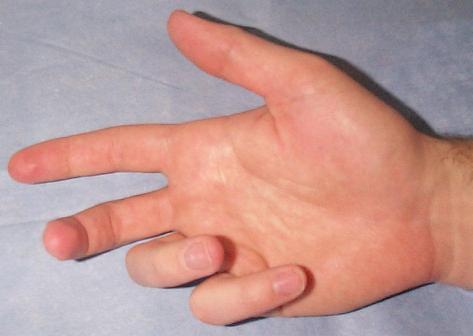 In Dupuytren’s contracture the thin but tough fascia on the palm side of the hand thickens – as much as 0.5cm – and then essentially “shrinks”, resulting in a tight contracture of hand tissue in the area of the palm and fingers that the diseased tissue overlies. Initially the lesion is described as a nodule or lump, later this characteristic formation develops into a cord or band that restricts finger extension or straightening. 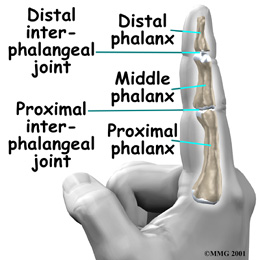 Dupuytren contracture – drawing showing location of fascia below the skin,
and how it is the fascia that contracts causing inability to straighten finger(s)
affected and dimpling of the overlying tissue above the contraction

Dupuytrens contracture – another dual illustration of surface changes and
underlying tissue involvement, showing the hand anatomy that is affected

Dupuytrens contracture is a slowly progressing condition, occurring most often in the fourth and fifth digits (ring and little fingers), that first appears in middle age persons; however, if there is a strong family history of severe hand contracture it can occur as early as age twenty, especially in males. One finger or all of the fingers could become involved. The index finger and thumb are seldom involved. The distal joints (closest to the fingertips) are never affected.

In time the fingers may be drawn down permanently into the palm. Flexing or bending the fingers is not a problem; straightening them becomes progressively more difficult or impossible if the disease is severe. Eventually there is variable difficulty with common daily activities (washing hands, dressing, wearing gloves, handling tools, shaking hands or placing them in pockets).

It has been associated with diabetes and can be seen in alcoholics with cirrhosis of the liver. It has also been associated with epilepsy, but may be a result of the use of anticonvulsant drugs rather than the presence of epilepsy itself. Like other similar soft-tissue disease, the cause remains unknown.

Dupuytren’s contracture has been determined to be a “rare disease” by the Office of Rare Diseases (ORD) of the National Institutes of Health (NIH).  This means that Dupuytren’s contracture affects less than 200,000 people in the US population, and approximately 1.4 million worldwide.   Dupuytrens contracture is found most commonly in white males of North European ancestry. Approximately 80% of affected individuals are male; this predisposition is consistent in all countries and races. It affects up to 39% of males over the age of 60 and although less prevalent in women differences decrease as age increases. It is slightly more common in non-manual workers, although there are studies that suggest it could be work-related.

Lump on Palm of the Hand Facts

Dupuytrens contracture can cause a person to lose the full and normal use of one or both hands. It is a serious problem that should be met just as seriously with an aggressive therapy plan that utilizes as many of the conservative measures that are outlined on this website. Go to Dupuytren Alternative Treatment to find out more about what can be done to assist the body to resolve or minimize this problem.

This site uses Akismet to reduce spam. Learn how your comment data is processed.